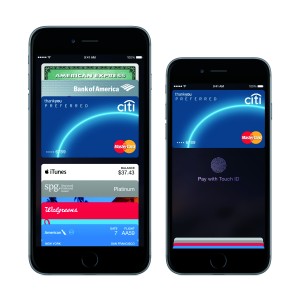 Apple Pay is dominating contactless payments in the US, taking two thirds of the share.

For every $3 spent on all purchases using contactless payments, Apple Pay accounts for $2 across the three biggest US card networks – American Express, MasterCard and Visa.

Apple Pay supports credit and debit cards from the three payment networks, issued by the most popular US banks including Bank of America, Capital One Bank, Chase, Citi and Wells Fargo.

Launched in Autumn 2014, Apple boss Time Cook quite rightly sees this as a strong start as a high number of retailers are signing up. “We are more confident than ever that 2015 will be the year of Apple Pay,” Cook said.

750 banks and financial institutions pledged support for the service. 200,000 payment kiosks and the like are using the Apple Pay service following a partnership with USA Technologies.

In the UK, retail bosses have recently voted mobile as the top omni-channel priority, receiving 67% of the vote, with investment in multi-channel listed as the ultimate priority. Contactless payments and Apple Pay will no doubt fit nicely into this agenda.